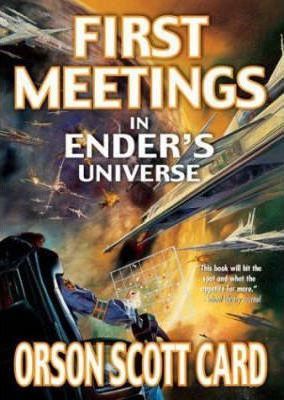 When "Ender's Game" was first published as a novella twenty-five years ago few would have predicted that it would become one of the most successful ventures in publishing history. Expanded into a novel in 1985, Ender's Game won both the Hugo Award and the Nebula Award for Best Novel. Never out of print and translated into dozens of languages, it is the rare work of fiction that can truly be said to have transcended a genre. Ender's Game and its sequels have won dozens of prestigious awards and are as popular today among teens and young readers as adults.

First Meetings is a collection of three novellas-plus the original "Ender's Game"-that journey into the origins and the destiny of one Ender Wiggin.

"The Polish Boy" begins in the wake between the first two Bugger Wars when the Hegemony is desperate to recruit brilliant military commanders to repel the alien invasion. In John Paul Wiggin-the future father of Ender -they believe they may have found their man. Or boy.

It is many years since the end of the Bugger Wars in "The Investment Counselor." Ender's reputation as a hero and savior has suffered a horrible reversal. Banished from Earth and slandered as a mass murderer, twenty-year-old Andrew Wiggin wanders incognito from planet to planet as a fugitive. Until a blackmailing tax inspector compromises his identity and threatens to expose Ender the Xenocide.

Fully illustrated, First Meetings is Orson Scott Card writing at the height of his considerable power about his most compelling character.

The Second Formic War (with Aaron Johnston)
The Swarm / The Hive