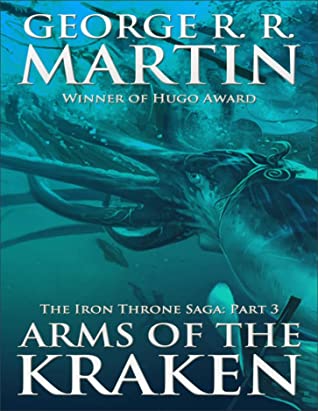 Arms of the Kraken is a novella published in issue 305 (March 2003) of the magazine Dragon. The story is based on the Iron Islands chapters from A Feast for Crows.

Following the death of King Balon Greyjoy, a kingsmoot is summoned by Aeron Damphair, Balon's youngest brother and the most respected priest of the Drowned God. With Theon Greyjoy a prisoner of the Boltons at the Dreadfort, the strongest candidates are Balon's brothers Victarion and Euron Crow's Eye, who has just returned from reaving in the east. Asha Greyjoy, Balon's daughter, also tries to claim the Seastone Chair in spite of her sex. The moot is deadlocked between the three until Euron reveals his plan to seize control of Daenerys Targaryen's dragons through the use of magic and so rule Westeros. The moot crowns Euron king, and Asha disappears with her ship northwards. Aeron, who considers Euron ungodly, also leaves to gain popular support against him.