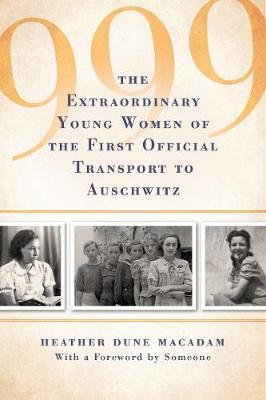 The untold story of some of WW2's most hidden figures and the heartbreaking tragedy that unites them all. Readers of Born Survivors and A Train Near Magdeburg will devour the tragic tale of the first 999 women in Auschwitz concentration camp. This is the hauntingly resonant true story that everyone should know.

On March 25, 1942, nearly a thousand young, unmarried Jewish women boarded a train in Poprad, Slovakia. Filled with a sense of adventure and national pride, they left their parents' homes wearing their best clothes and confidently waving good-bye. Believing they were going to work in a factory for a few months, they were eager to report for government service. Instead, the young women--many of them teenagers--were sent to Auschwitz. Their government paid 500 Reich Marks (about $200) apiece for the Nazis to take them as slave labor. Of those 999 innocent deportees, only a few would survive.

The facts of the first official Jewish transport to Auschwitz are little known, yet profoundly relevant today. These were not resistance fighters or prisoners of war. There were no men among them. Sent to almost certain death, the young women were powerless and insignificant not only because they were Jewish--but also because they were female. Now acclaimed author Heather Dune Macadam reveals their poignant stories, drawing on extensive interviews with survivors, and consulting with historians, witnesses, and relatives of those first deportees to create an important addition to Holocaust literature and women's history.

Includes a foreword by Caroline Moorehead, NYT bestselling author of A Train in Winter!

"A fresh, remarkable story of Auschwitz on the 75th anniversary of its liberation. An uplifting story of the herculean strength of young girls in a staggeringly harrowing situation."
--Kirkus