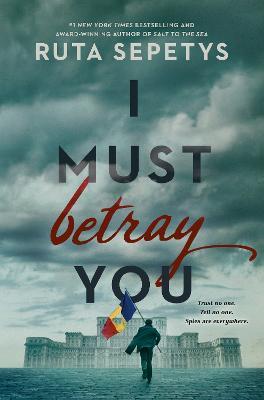 I Must Betray You by Ruta Sepetys Free Download

A gut-wrenching, startling historical thriller about communist Romania and the citizen spy network that devastated a nation, from the #1 New York Times bestselling, award-winning author of Salt to the Sea and Between Shades of Gray.

Romania, 1989. Communist regimes are crumbling across Europe. Seventeen-year-old Cristian Florescu dreams of becoming a writer, but Romanians aren’t free to dream; they are bound by rules and force.

Amidst the tyrannical dictatorship of Nicolae Ceaușescu in a country governed by isolation and fear, Cristian is blackmailed by the secret police to become an informer. He’s left with only two choices: betray everyone and everything he loves—or use his position to creatively undermine the most notoriously evil dictator in Eastern Europe.

Cristian risks everything to unmask the truth behind the regime, give voice to fellow Romanians, and expose to the world what is happening in his country. He eagerly joins the revolution to fight for change when the time arrives. But what is the cost of freedom?

Master storyteller Ruta Sepetys is back with a historical thriller that examines the little-known history of a nation defined by silence, pain, and the unwavering conviction of the human spirit.

Praise for I Must Betray You:

“As educational as it is thrilling...[T]he power of I Must Betray You [is] it doesn’t just describe the destabilizing effects of being spied on; it will make you experience them too.” –New York Times Book Review

“A historical heart-pounder…Ms. Sepetys, across her body of work, has become a tribune of the unsung historical moment and a humane voice of moral clarity.” –The Wall Street Journal

* "Sepetys’s latest book maintains the caliber readers have come to expect from an author whose focus on hidden histories has made her a YA powerhouse of historical ­fiction…Sepetys is a formidable writer, and her stories declare the need to write about global issues of social injustice. For that reason and her attention to detail, this is a must-read." –School Library Journal, starred review

“Sepetys keeps readers riveted to this vivid, heartbreaking and compelling novel, locked into every meticulously researched detail. I Must Betray You demands a full investment from its audience--through poetic writing, sympathetic characters, revolutionary plot and pacing, it grips the heart and soul and leaves one breathless.” –Shelf Awareness, starred review

"A master class in pacing and atmosphere." –BookPage